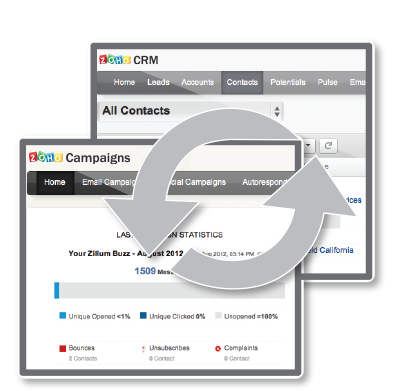 Zoho have recently publicised the release of Zoho Campaigns, which will serve as an email and social networking tool that is also incorporated into Zoho's already renowned CRM suite. As well as allowing customers to create and organise email campaigns, it provides email templates and also allows customers to upload their own templates. Users will also be able to observe the number of bounce backs and the rate of subscribers in real time, with ever updating reports on demand. The new Zoho Campaign software also allows customers to launch social media campaigns on Facebook, Twitter and LinkedIn. The real time updates of the reports will allow users to monitor the number of likes, tweets, comments and shares. With regards to Zoho's CRM software, Zoho campaigns also allows CRM contacts to be synchronised along with their new social media campaigns and emails. It also incorporates users' Google contacts, allowing full synchronisation on virtually every main social network site. Zoho Campaigns has also integrated Google Apps, meaning that customers can create documents on Google Drive and can send them across their various social media accounts via Zoho Campaigns. This is another step by Zoho to boost their efficiency in the realm of social media, which is rapidly changing. Other evidence of this has been Zoho's integration of their Support module for social media sites like Facebook and Twitter. This allows users of those sites to receive Zoho support by contacting Zoho Support representatives, who will be able to respond much quicker and, more importantly, on a much more personal level.